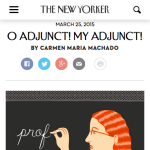 “The irony of this setup has not escaped me: the adjuncts who teach well despite the low pay and the lack of professional support may inspire in their students a similar passion—prompting them to be financially taken advantage of in turn. It strikes me as a grim perversion of the power of teaching. A key lesson in higher education is that few things matter more than good questions—and, if we don’t speak up, students will never know what to ask.” 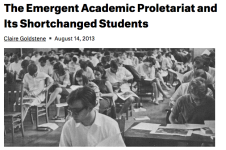 “As contingent faculty endeavor to improve their working conditions and pay, students have become important allies. For, while the majority of university teachers struggle to earn a living, tuition rates and student indebtedness continue to soar, a circumstance that belies administrative claims that improved salaries for adjunct faculty require increased tuition. Rather than accede to such divide-and-conquer tactics, students have begun to ask how their tuition dollars are being spent, if not to pay their teachers a livable wage, and have demanded more input in university governance, where boards of trustees are largely comprised of representatives of the banking and financial industries.”

“And you know, what unionization provides is something of a structure, some form of representation and collective bargaining, all those kinds of things, which can lead to structural changes, which then, of course, hopefully, leads to people being treated better. The fact is there is money in Universities; there’s a tremendous amount of money in universities. And as with any industry one has to fight for the money to go to the people who do the work. The tendency for the university is to exploit the people who are doing the work.”