The administration of Barnard College has retained the law firm of Jackson Lewis P.C. to represent it at the bargaining table. Given Jackson Lewis’s self-professed specialization in “union avoidance” and the information below, we are troubled by the administration’s decision to take such a confrontational, unproductive, and reactionary approach towards bargaining with its faculty, an approach which contravenes the ethos of a small feminist liberal arts college. Regardless, we remain resolved to fight for those changes in our working conditions that will enhance Barnard’s reputation as an institution committed to teaching and learning.

“Unionbusting Confidential: To keep out organized labor, you need the union-busting law firm Jackson Lewis” by Art Levine, In These Times – September 24, 2007 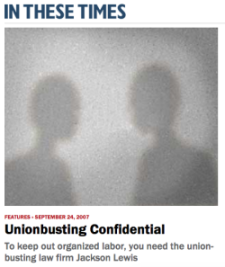 [Reporting the advice of Jackson Lewis lawyer Michael Stief] But if everything failed, and we found ourselves negotiating with a newly formed union, then we still shouldn’t lose heart. Instead, we could continue to undermine the union by rejecting all of its demands during negotiations. […] The trick was in how to word refusals. First, with a shout, Stief demonstrated what not to say in response to a demand for increased wages: “I’m not listening to no stinkin’ wage increases!” He resumed his normal voice: “Does that sound like good faith? No.” Then Stieff showed us the proper alternative: “I’m not inclined to agree to that proposal at this time.” He observed. “Does that sound like good faith? Yes, but I’m saying the same thing I did before.” The lesson? “You can say no to anything.” 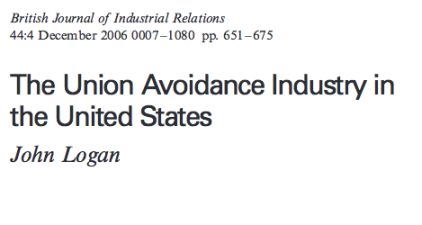 As part of an industry that profits from promoting conflict in labour–management relations, Jackson Lewis, in common with many union avoidance firms, has used militant anti-union rhetoric when marketing its services to employers. It has encouraged employers to treat union organizers like they would treat a ‘contagious disease’ and to inoculate their employees against the ‘union virus.’

“How Do You Drive Out a Union? South Carolina Factory Provides a Textbook Case” by Steven Greenhouse, New York Times – December 14, 2004 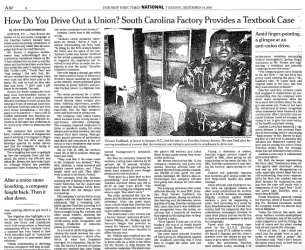 “Jackson Lewis is a key player in the union avoidance industry,” said Fred Feinstein, former general counsel at the NLRB. “This kind of aggressive anti-union campaign is not unusual.” […] EnerSys sued Jackson Lewis, accusing it of malpractice, including misleading federal investigators, giving illegal assistance to Mr. Brown and engineering “a relentless and unlawful campaign to oust the union.” […] EnerSys said that Jackson Lewis had engaged in malpractice by recommending that the company withdraw union recognition when the firm must have known about the illegal anti-union aid. Federal law bars the withdrawal of union recognition when companies have financed a decertification effort. EnerSys also accused Jackson Lewis of wrongly advising it not to give the union notice of the layoffs and plant closing.